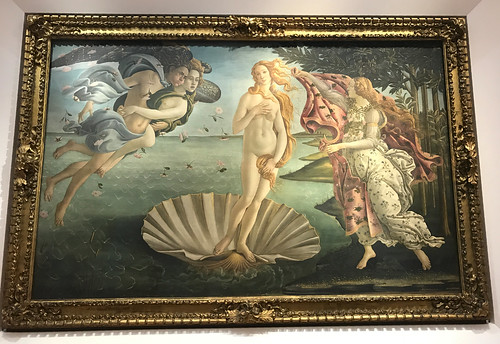 The Birth of Venus or Nascita di Venere is a painting by Sandro Botticelli. It depicts the goddess Venus, having emerged from the sea as a full grown woman, arriving at the sea-shore (which is related to the Venus Anadyomene motif). The painting is held in the Uffizi Gallery in Florence.

Tradition associates the image of Venus in Botticelli’s painting with the lovely Simonetta Cattaneo Vespucci, with whom it is suspected both Lorenzo and his younger brother, Giuliano, were much enamored. Simonetta was, not coincidentally, born in the Tuscan seaside town of Portovenere (the port of Venus). In the case of Botticelli’s Birth of Venus, the suggested references to Lorenzo, supported by other internal indicators such as the stand of laurel bushes at the right, would have been just the sort of thing erudite Florentine humanists would have appreciated.

These essentially pagan readings of Botticelli’s Birth of Venus should not exclude a more purely Christian one, which may be derived from the Neoplatonic reading of the painting indicated above. Viewed from a religious standpoint, the nudity of Venus suggests that of Eve before the Fall as well as the pure love of Paradise. Once landed, the goddess of love will don the earthly garb of mortal sin, an act that will lead to the New Eve – the Madonna whose purity is represented by the nude Venus. Once draped in earthly garments she becomes a personification of the Christian Church which offers a spiritual transport back to the pure love of eternal salvation. In this case the scallop shell upon which this image of Venus/Eve/Madonna/Church stands may be seen in its traditionally symbolic pilgrimage context. Furthermore, the broad expanse of sea serves as a reminder of the Virgin Marys’ title stella maris, allluding both to the Madonna’s name (Maria/maris) and to the heavenly body (Venus/stella). The sea brings forth Venus just as the Virgin gives birth to the ultimate symbol of love, Christ.

Rather than choosing one of the many interpretations offered for Botticelli’s depiction of the Birth (Arrival?) of Venus it might be better to view it from a variety of perspectives. This layered approach — mythological, political, religious–was intended.

Botticelli’s art was never fully committed to naturalism; in comparison to his contemporary Domenico Ghirlandaio, Botticelli seldom gave weight and volume to his figures and rarely used a deep perspectival space. In the Birth of Venus, Venus’ body is anatomically improbable, with elongated neck and torso. Her pose is impossible: although she stands in a classical contrapposto stance, her weight is shifted too far over the left leg for the pose to be held. Moreover, were she actually to stand on the edge of the shell (which cannot be identified as real), it would certainly tip over. The bodies and poses of the winds to the left are even harder to figure out. The background is summary, and the figures cast no shadows. It is clear that this is a fantasy image.

Venus is an Italian Renaissance ideal: blonde, pale-skinned, voluptuous. Botticelli has picked out highlights in her hair with gold leaf and has emphasized the femininity of her body (long neck, curviness). The brilliant light and soothing colors, the luxurious garden, the gorgeous draperies of the nymph, and the roses floating around the beautiful nude all suggest that the painting is meant to bring pleasure to the viewer.

The scene was inspired by the text in an Homeric hymn published in Florence in 1488 by the Greek refugee Demetrios Chalcondyles:

"Of august gold-wreathed and beautiful
Aphrodite I shall sing to whose domain
belong the battlements of all sea-loved
Cyprus where, blown by the moist breath
of Zephyros, she was carried over the
waves of the resounding sea on soft foam.
The gold-filleted Horae happily welcomed
her and clothed her with heavenly raiment."