A Guanajuato police officer was killed and one National Guardsman was wounded after gunmen believed to belong to the Jalisco New Generation Cartel (CJNG) made five separate attacks on state and federal law enforcement officials Monday in the municipalities of Villagrán and Celaya.

In total, eight of the aggressors were killed and one other presumed gang member was later found dead inside a truck on the road between Celaya and Salamanca.

Three were arrested in the conflicts.

Although some of the gunfights reached as far as Santa Rosa de Lima, a stronghold of the Santa Rosa de Lima Cartel led until last year by jailed leader José Antonio “El Marro” Yépez Ortiz, authorities attributed the attack to the CJNG.

Yépez was arrested by federal authorities in August, spawning fears that the power vacuum would prompt bloody turf wars between the two gangs in Santa Rosa de Lima territory, which includes Celaya, Irapuato and Villagrán, as well as adjacent zones in the north and south.

In the final tally after the five firefights, authorities confiscated 10 vehicles and several weapons, including guns, grenades — some fragmentation grenades and some improvised — and Molotov cocktails. They also discovered 47 doses of crystal methamphetamine and cardboard signs with messages targeted at an unidentified criminal group.

The first attack on law enforcement occurred at dawn on the road between Santa Rosa de Lima and San José de Guanajuato, authorities said. There, officers ended up in a gunfight with armed men aboard several vehicles, resulting in five of the latter being killed. The police officer who died was injured in that conflict and died in a hospital in Celaya.

After the first attack, authorities brought in reinforcements, who were also attacked on three separate occasions near San Salvador Torrecillas in Villagrán.

After the first of those attacks was staved off, the armed civilians jumped off the pickup truck from which they had staged the firefight and fled into nearby farmland, evading arrest. The second attack, which came from a different vehicle in a different location, resulted in the attackers fleeing the scene without any arrests.

In the third attack, state officers killed one of the aggressors.

The National Guard were also attacked by gunmen in two SUVs in a separate incident between Santa Rosa de Lima and San José de Guanajuato. In that battle, one officer sustained mild injuries, one attacker was killed and a second attacker was wounded and later died. A minor was arrested.

Two other people were also detained on the highway between Celaya and Villagrán after their truck was stopped and they were found to be in possession of drugs and weapons. 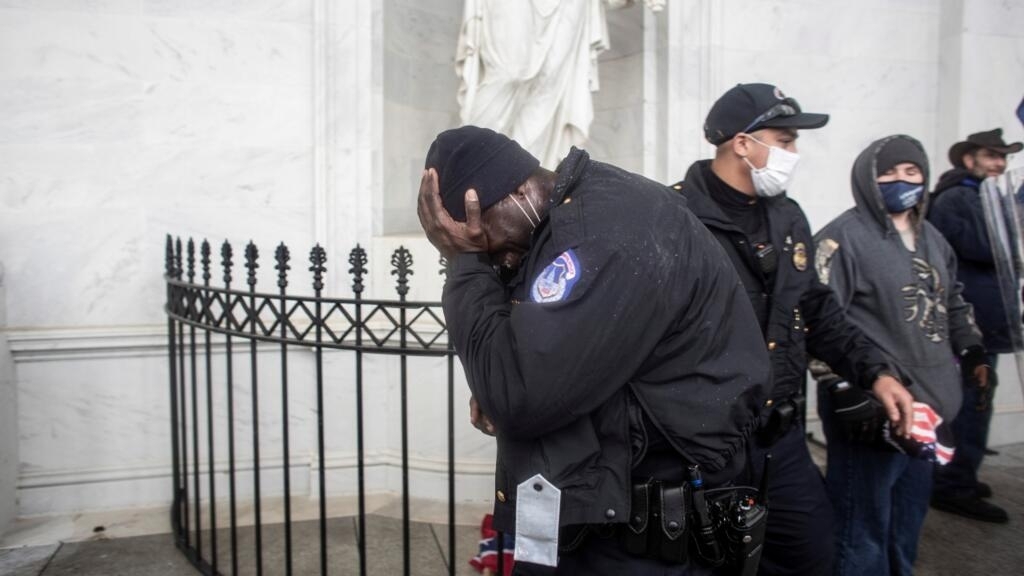 A US Capitol Police officer has died of injuries sustained during clashes with a mob of President Donald Trump’s supporters who overran a session of Congress, police said late Thursday.

Officer Brian D. Sicknick died Thursday due to injuries sustained while on-duty, physically engaging with protesters at the US Capitol, a statement said.

It was the first law enforcement death stemming from Wednesday’s violence at the Capitol which saw flag-waving crowds overwhelm police and break into the legislature as Congress was tallying the Electoral College votes to confirm Democrat Joe Biden won the election.

Sicknick, a 12-year veteran of the force, was “responding to the riots on Wednesday, January 6, 2021, at the US Capitol and was injured while physically engaging with protesters,” Capitol Police said in a statement.

“He returned to his division office and collapsed. He was taken to a local hospital where he succumbed to his injuries” on Thursday night, it said.

Democratic leaders of the House Appropriations Committee said the “tragic loss” of a Capitol police officer “should remind all of us of the bravery of the law enforcement officers who protected us, our colleagues, Congressional staff, the press corps and other essential workers″ during the hours-long takeover of the Capitol by pro-Trump protesters.

Four protesters died in the violence, including a woman who was shot by police. Three other deaths were reported on the Capitol grounds, but the circumstances remained unclear.

Sicknick’s death will be investigated by the Metropolitan Police Department’s Homicide Branch, the USCP, and federal law enforcement.

In declaring the final vote totals, Vice President Mike Pence certified the Electoral College count of 306 votes in favor of Biden against 232 in favor of Trump.

It takes at least 270 electoral votes to win the White House. The former U.S. vice president also won the popular vote by more than 7 million ballots.

“The announcement of the state of the vote … shall be deemed a sufficient declaration of the persons elected President and Vice President of the United States,” Pence said.

Soon after Congress concluded the electoral vote count certifying Biden’s victory, Trump, who had repeatedly refused to concede the election, pledged that there will be an “orderly transition” of power on Jan. 20.

“Even though I totally disagree with the outcome of the election, and the facts bear me out, nevertheless there will be an orderly transition on January 20th,” Trump said in a statement.

Hours before the announcement of Biden’s win, four people, including a woman who was shot by Capitol Police, died amid clashes between police and Trump supporters, which also led to dozens of arrests, according to police. At least 14 officers sustained injuries.

Fighting between the Myanmar military and the Karen National Union (KNU), the country’s oldest ethnic rebel army, resumed in southeastern Kayin state in early December, despite a nationwide cease-fire agreement (NCA) the ethnic army signed in 2015.

A statement issued by the Karen Youth Network said that the ruling civilian-led National League for Democracy and the government military were responsible for this instance of backsliding on the country’s peace process.

“If these activities cannot be stopped, it will only hurt the local civilians, mainly ethnic Karen people,” said Saw Kyaw Linn Oo, a member of the KYN secretariat.

“Karen people have endured the affects of civil war for nearly 80 years since the time of Myanmar’s independence,” he said. “Karen people don’t want these armed conflicts anymore, so we are going to take a step-by-step approach to resolve the issue.” Saw Kyaw Linn Oo did not elaborate on what this process would entail.

Decades of warfare in Kayin have resulted in about 140,000 of Myanmar’s roughly six million ethnic Karen people living in refugee camps in nearby Thailand, according to aid groups.

Armed engagements have occurred in the Mae Wai area of Hpapun district, part of the territory controlled by the KNU’s Division No. 5, because the Myanmar military has refused to withdraw troops from the area as required by NCA.

On Wednesday, more than 10,000 ethnic Karens staged a protest in the district’s Lu Thaw area demanding that the military withdraw soldiers, close a local army base, and suspend military construction work.

Meanwhile, thousands of area residents have left their homes, fearing full-blown hostilities in the restive area where sporadic clashes have occurred between Myanmar soldiers and the KNU since early December, said a local who declined to be named out of concern for his safety.

“More than 100 soldiers from nearby Taiti village have been ordered to reinforce existing troops,” he told RFA. “Now, most of the men in the village have left, and only women and children remain at home.”

Tensions between the ethnic army and Myanmar forces are also growing in territory controlled by the KNU’s Division No. 1 in Thaton district of neighboring Mon state, because of a buildup of local soldiers backing up the government army and its affiliated Karen Border Guard Force (BGF), locals said.

Villagers are maintaining low profiles to avoid attracting attention from soldiers in the area, said a woman who requested anonymity for safety reasons.

“Local villagers are now trying to keep quiet more than before,” she said. “Some villagers have already fled, including some people from the Kyaik Kaw area. Some have gone to places very far away, while others are staying close to the village.”

“Villagers are now sleeping under their houses, so they can get to bomb shelters in case of an emergency,” she added. “No one dares to sleep inside their home. Everyone is afraid.”

KNU officials told RFA that leaders from both sides are negotiating, but that they have put their troops on alert.

“If the negotiations with Division No. 1 are not successful, there will be more fighting,” the first local said.

Colonel Saw Kyaw Myint from the KNU’s Division No. 1, told RFA that both sides are closely watching the other’s movements while top leaders continue their talks.

“The military should have withdrawn its troops,” he said. “If it doesn’t, then the situation could get worse. We will have to wait and see. We are now taking orders from the central leadership.”

Colonel Saw Ae Do Htoo, external relations officer of the KNU’s Division No. 5, said that the current sporadic clashes in the region cannot be resolved through low-level negotiations.

“Many local civilians from the Mae Wai area are now fleeing their homes,” he said. “We are hoping that we can resolve these tensions through meetings and negotiations between top [Myanmar] military officers and our top leaders.”

“The military has informed the KNU’s head office to supervise its soldiers more carefully as these armed engagements could derail the ongoing peace process that both the military and the KNU are working on,” he said. “I believe that this issue can be resolved through the negotiations.”

Nang Say Awa, a civilian member of the state-level Joint Ceasefire Monitoring Committee (JMC), which monitors the implementation of the NCA, expressed concern over the situation, but stressed that the two sides must resolve their differences.

“We are all concerned about the situation, [and] we empathize with both sides,” he said. “But as a civilian organization, the JMC has only limited power. It is the troops from both sides who need to negotiate and compromise.”

Min Zaw Oo, executive director of the Myanmar Institute for Peace and Security, who has been has been involved in the ongoing peace process in Myanmar since its inception, agreed that the new clashes in Hpapun are affecting the country’s peace process.

The KNU is one of 10 ethnic armies that have signed the NCA, a pact intended to end decades of conflict that have stymied Myanmar’s political and economic development.

Though the KNU is an NCA signatory, it has been involved in skirmishes this year, triggered by government soldiers entering KNU-controlled territory for road construction work.

In July, thousands of ethnic Karens rallied outside army outposts demanding justice for a villager shot dead by two drunk Myanmar Army privates during a scuffle and called on the government to withdraw its troops from the district.