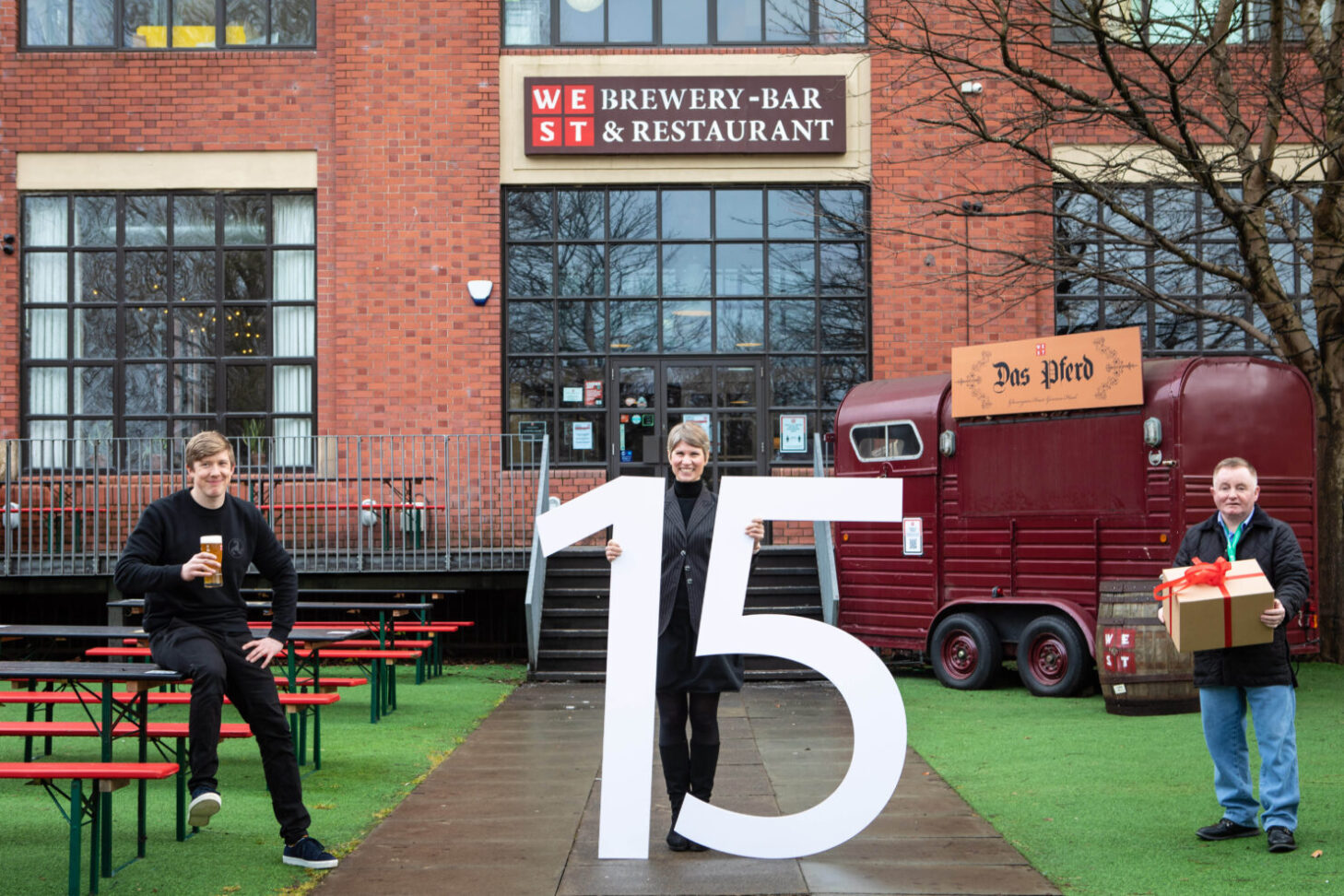 GLASGOW bar and brewer, West, is set to mark its 15th anniversary with a special takeaway offer that will also raise money for the local food bank.

The West Beerhall Birthday Box is described as a “dining and beer experience for two”. The boxes, available from the West website, each contain four dishes from West’s menu (with meat, vegetarian and vegan versions) as well as six West beers. The boxes are priced at £65 each (£60 for the vegan version), with £5 from each order being donated to the Glasgow North East Food Bank in Calton. The boxes can be ordered for delivery or collection, with customers who collect their orders also encouraged to bring a food bank donation with them.

One of the boxes will also contain a ‘golden ticket’, which will entitle the recipient to a brewery tour and dinner for four when the venue reopens.

“The West team racked their brains on how to safely celebrate a big milestone birthday with an appropriate celebration during a pandemic lockdown so executive chef Joanne Munro and head brewer, Simon Roberts put their heads together and came up with The West Brewery Birthday Box Beerhall Experience for two,” said West founder Petra Wetzel.

“One in four children in Glasgow go to bed hungry and one in five households are living below the poverty line.

“Our beloved hospitality industry has been decimated during the lockdown which has put many businesses at the brink of collapse, however we are well aware that many families do not even qualify for the government’s furlough scheme and are struggling on Universal Credit. We therefore wanted to make sure that our Birthday Box celebrations also provide food for many in our immediate neighbourhood.

“That is why £5 from the price of every Birthday Box will go to the Glasgow North East Food Bank in the Calton.”

The Beerhall Birthday Boxes will be available to order through the West website until 3pm on Wednesday 10th March.


Cold snap continues across the country

A cold front with some extremely chilly temperatures continues across most of central, southern and eastern Finland on Friday – coming after three days of heavy snow. Overnight from Thursday into Friday the coldest temperature was registered at Kuhmo in Kainuu with -35.6°C, while in North Karelia -34.1°C was measures in Juuka. During the day on Friday the coldest temperatures are forecast for South Savo and North Karelia. This week’s wintry weather has seen an increase of heart attack patients according to Helsinki and Uusimaa Hospital District. A dozen people were admitted for heart attacks which happened as they were working to clear snow. Two people died. Doctors say the patients are mostly older men and caution that if you’re not already in decent shape, don’t over-exert yourself suddenly by trying to clear away the accumulated snow.

Ferry company Tallink will offer free, voluntary Covid-19 tests on passengers arriving in Helsinki from Tallinn, as well as coronavirus health advice The actual testing is being carried out by the City of Helsinki’s Social and Health Service on the Star and Megastar vessels, and passengers will get their results via SMS text message within 1 to 3 days. The idea behind the new initiative is to slow the spread of new, more contagious strains of coronavirus in Finland. Recently the coronavirus situation in Estonia has deteriorated rapidly and there’s now 574 confirmed cases of covid per 100,000 inhabitants in the last two weeks. The corresponding number in Finland was about 64 cases per 100,000 inhabitants.

The Finnish Institute for Health and Welfare reports the number of cases of coronavirus detected in Finland has decreased slightly, and there’s a declining number of patients who need to be treated in hospital. THL says a feared spike of cases after the Christmas holidays has not materialised. The R-number, the number of people one infected person can infect, has dropped below 1 and is currently estimated at 0.7 to 0.9. Most of the Covid-19 infections in Finland are now being detected in younger people and working-age adults, with the majority living in the same household. While most infections are domestic, some 11% of people who test positive in Finland were infected abroad.

The Finnish men’s national football team scored at Thursday night’s Urheilugaala sports awards. Huuhkajat, who qualified for their first major international tournament, saw their coach Markku Kanerva named coach of the year; goalkeeper Lukas Hradecky was awarded the athlete of the year award; while the whole team received the team of the year award. Another noteable winner was recently-retired biathlon star Kaisa Mäkäräinen who got the Finnish sports ambassador award. That trophy had previously been given to footballer Sami Hyppi, F1 racer Kimi Räikkönen and ice hockey player Teemu Selänne, with Mäkäräinen saying she was “extremely honored to have the opportunity to join their ranks.”

Today marks the 250th anniversary of the publication of Finland’s first newspaper. On this day in 1771 readers were able to get their hands on the first copy of Tidningar Utgifne Af et Sällskap i Åbo – Magazine Published by the Turku Society – which had just eight pages. It was Finland’s first foray into newspapers but focused more on academic articles than actual news as we would know it today: in fact, when a large part of Turku was destroyed by fire in 1775 the local newspaper did not even mention the blaze. The first magazine ran for eight years and again after a break for for more years. All the issues are available on the National Library’s website.

The cold snap continues on Friday with the lowest temperatures across central, eastern and southern areas between -23°C to -30°C but it will feel colder than that in exposed or windy places. Across Lapland temperatures are more mild ranging from -8°C in Inari in the far north to -20°C around Rovaniemi on the Arctic Circle. Over the weekend temperatures warm up significantly – with plenty of sunshine around for Saturday in particular – up to only -3°C in Jyväskylä on Sunday for example.


Health impact of coronavirus felt on everyday life across the country

An extensive new FinSote survey from THL shows how the impact of the coronavirus crisis this year has been felt across the whole country when it comes to health – but most keenly in the Uusimaa region. There are clear differences between health and social services counties in how therapy appointments have been postponed or cancelled, how the epidemic has weakened the economic and social situation of the population and how the epidemic has affected lifestyles. In Uusimaa the number of missed or canceled appointments for doctors and nurses was significantly higher than in other areas, especially for the elderly. “Cancelled or postponed visits are a cause of concern, as the accumulation of service needs and postponement of treatment may lead to a worsening of health problems and an increase in the need for assistance in the longer term” explains Anna-Mari Aalto, THL Chief Specialist.

Demand for change in electoral act to allow conscripts to vote

An alliance of youth organisations from parliamentary political parties, the Conscripts’ Association and Demo Finland are calling for a change in the Electoral Act to make it easier for young people doing their military conscription to be allowed to vote. The groups say the current law makes it difficult for conscripts to vote in advance because of long distances to advance polling stations, and because of their limited amount of free time. They also have difficult voting on election day itself because the current law does not allow the possibility to have a polling station at military garrisons. One solution is to add garrisons to a list of specific places where voting can take place. “The voice of young people performing military service must be heard in the election. We need an amendment to the Election Act that will enable voting in garrisons and promote the realization of equal voting rights for young people” says Anu Juvonen, Executive Director of Demo Finland, a co-operative organisation of all Finnish parliamentary parties which supports collaborative projects to develop democracy. The municipal elections are being held in April 2021.

The Helsinki and Uusimaa Hospital District, the largest in Finland, says their plans to start a comprehensive Covid-19 vaccination programme for healthcare staff are well underway. The first in line to receive the new vaccines, when they come to Finland after being approved by European regulators, will be staff involved in treating coronavirus patients. “We have years of experience in staff flu vaccinations. Coronavirus vaccinations will differ from influenza vaccinations in that vaccinations will progress in stages depending on the person’s job” explains Eeva Ruotsalainen, Assistant Chief Medical Officer. HUS will introduce an online appointment system, similar to the coronavirus testing system already in place, to allow staff to book a time for their shots. The news comes as EU regulators will bring forward a decision on the safety of the first vaccine under review, from Pfizer-BioNTech, after authorities stepped up pressure for a faster decision – making it clear they expected approval to start using the drug, if it is safe, before Christmas. The Amsterdam-based European Medicines Agency will now meet on 21st December, rather than 29th December, to approve the new vaccine for rollout across the EU.

Almost half of all car accidents happened in parking lots

New figures from the Finnish Motor Insurers’ Centre reveal there were almost 100,000 traffic accidents with an insurance claim in 2019, down around 3% from the year before. But nearly half of those accidents, 45%, happened in parking lots. The figures also show that 82% of the accidents caused damage to the vehicles and 18% caused personal injury. Some 23,008 people were injured in car accidents last year – 313 seriously according to the new data.

Researchers at the University of Helsinki have been charting the language choices of Twitter users and unsurprisingly have discovered that Finnish and English are the main languages used in the online platform. However Swedish is used more often than average in Swedish-speaking areas, while Russian is more common near the eastern border. “In rural areas, more Finnish than average and less English than average are used. Otherwise, Finnish and English are fairly evenly distributed” geographically, around the country, says Assistant Professor Tuomas Hiipala.  The study collected 38 million Twitter posts from 30,000 users – two million of which contained location information.

It’s a wet start to Wednesday morning across most of the country, with precipitation falling as rain, sleet or snow depending on the temperatures. In southern, southwestern and western areas temperatures range from around freezing up to +6°C so expect mostly rain turning to sleet. In Lapland temperatures dip to -6°C and there’s snowfall in the forecast.

Out of office until the 15th of July

I want to enjoy good time with my family and my friends, and don’t think about work and problems

Over the next few days, I will not be able to:

Be sure that, from the 15th of July, I will start to read and answer your emails. Please note that I’m human and I’m the only one working on this app, so I will probably not be able to answer to everyone exactly the 15th of July…

Until this day, it is useless to:

For the moment, this website is your best friend.

Thank you all for your understanding!